How do I play?

The game starts off with each player being dealt 10 white cards, each card being a unique answer that they can use to fill in a blank. After cards have been dealt, the bot will assign a player to be the first round's Card Czar, who is responsible for choosing the winning card. The bot will announce the black card, which is a prompt with a blank. Players will play their white cards to fill in the blank to the best of their ability.

White cards are cards that are dealt to each player that they can play each round to respond to the black card. Each player will have 10 cards at any given time to play, and the cards will used will be replenished after each round.

A black card is a prompt that is revealed every round with one or more blanks that players can play a white card to fill in the blank as best as they can. Each round, the bot will randomly pick from a list of over 1000 black cards, which will keep the game dynamic. 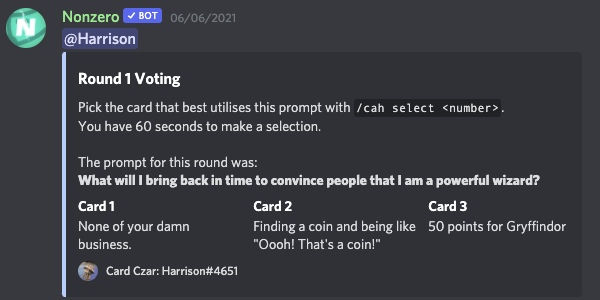 The Card Czar is the current player who is overseeing the cards that are being played, and in turn decides which white card wins for the current round. The Czar will be rotated every round through the list of players in the game.